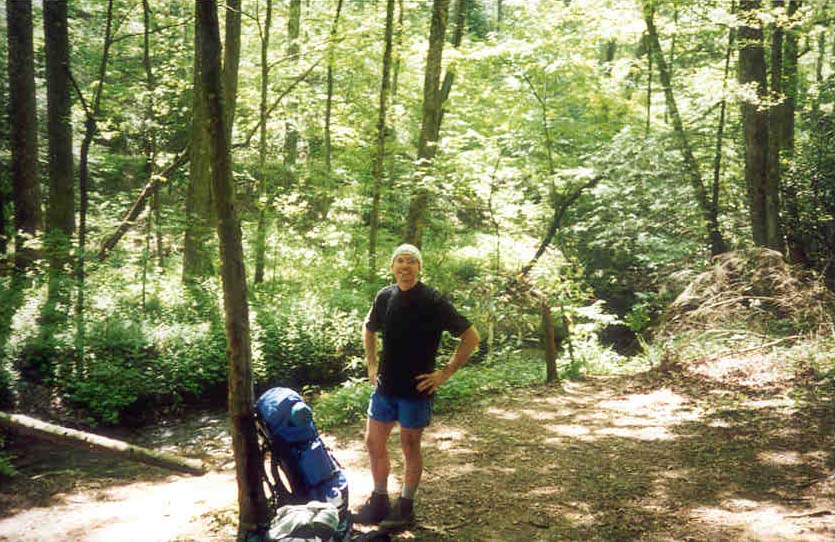 Ray trailside on the AT.

On May 11, 1995 my hiking partner "Fish out of Water" and I began a journey like none we'd previously undertaken: a pure thru-hike of the Appalachian Trail, all 2,169 miles of it in 1995. We hiked together for six weeks, when I developed a serious ankle injury. I encouraged Fish to proceed without me, while I rested the ankle. He reluctantly continued. Unfortunately, we never saw each other again on the hike. After three days of icing, I decided my dream would happen then, or perhaps never. I began hiking, and the pain in my ankle returned. I decided to push through the pain and a couple of weeks later, after some intense pain, the injury healed. I was on my way to completing a real walk in the woods.

I pushed on during the next eight weeks averaging over 27 miles per day, with no days off. I completed my pure thru-hike on August 16, 1995. It took 90 days to hike the Appalachian Trail, plus seven days off. The hike was a marvelous experience, and I would like to next hike the Pacific Crest Trail (since I wrote this original note, I've completed the PCT and CDT). Fish also completed his thru-hike of the Appalachian Trail. It turned out that we missed each other in New Hampshire by one day; he'd leaped frogged ahead. We share stories about the Appalachian Trail each time that we get together. The memories are priceless.